He placed his bag in the back seat of his car and slid behind the wheel. His direction was supposed to be north but instead he was actually headed southeast. His wife had no idea that he had a mistress, not a sexual mistress but a domme.

His domme intrigued him in many ways and he wanted to be collared by her. She had the ability of (RDF)which is described by techopedia as a phenomenon in which an individual’s intellectual abilities, persuasion skills and persistence make other people believe in the possibility of achieving very difficult tasks.

He had suggested that he get his balls pierced to show her his committment to her as her sub.  She had much to think about before making the final decision to have him pierced as he had skin cancer issues.

She was concerned about the Dr. appointments he would have to go to and being pierced could be extremely embarrassing for him.  She was also concerned that he might need some type of full body exam or x-ray which would require him remove the handcuffs that hung from his balls.

He was not allowed to stay at her home so he got a hotel room not far from her. She met him at the hotel and they headed to the tattoo and piercing shop. She had made arrangements to have a female pierce him and she had ordered him to place an order for the perfect piece of jewelry.

She felt that a pair of handcuffs on a bar through his balls was the perfect piece to show ownership. So many claim to be collared by their domme or dom but the truth is they are living out a part-time collaring.

Most people could not wear a collar 24/7 as the vanilla world would not understand why someone would wear a collar every day.  Her sub was no exception and the handcuffs were a constant reminder.

She wanted him to remember who controlled who and every time he had to pee he had that constant reminder as the handcuffs would pull on his scrotum and remind him that even though she was not close she had her hands on his balls from a distance, literally.

They stopped at a shop that sold body piercing jewelry and they picked up a bar bell which would be perfect for the piercing. Once at the piercing shop they had to use the jewelry provided with the piercing as it had been sterilized.

He dropped his pants and sat down and Nicole the girl who would pierce him picked up the forceps and clamped them on his scrotum not far below his penis. He sucked in the air as it was a slight bit painful and then she pierced him so quickly he had no time to prepare for it.

He was quite happy to have it done and over with and his mistress stood by his side while Nicole did her job.  The mistress took pictures of her now collared sub and she was proud of him as he took the piercing quite well.

They left the shop and stopped and got some cleaner that Nicole recommended using several times a day. The mistress and sub stopped and had lunch and chatted then decided to head back to the hotel to put the handcuffs on the bar bell.

The handcuffs needed additional links as there was not enough length between the cuffs to put each cuff on an end of the bar bell. They headed to the local store that carried the links they needed to make the cuffs fit properly.

They headed back to the hotel and he used his skills as someone involved in the jewelry field some years back. He added the additional links and his mistress placed the cuffs on his bar bell. 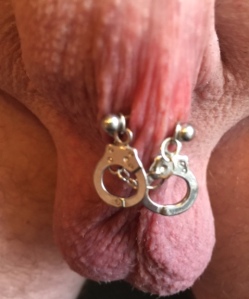 They went out and celebrated having a lovely dinner together. The mistress and sub had a wonderful non sexual relationship and they enjoyed each others company greatly.

They had a weekend filled with fun and excitement and Sunday finally came and he had to head home. He felt like the air had been let out of his tires as he headed home and his mistress went home and scheduled sessions.

He wanted to be a special sub to his mistress and he didn’t want her to pierce another sub. She didn’t collect subs and slaves and he was the only sub she had currently. They were a great team and not only enjoyed each other but also they had much to offer each other in the way of enriching each others vanilla lifestyle.

Behind The Mirror, bull, cuckhold, mistress

She never allowed her cuck to be in the same room when she was having sex with a bull. She had a special room built with a two-way mirror and she allowed him to watch her and her bull have an evening of fun.

He was ordered to replace the plain cotton egyptian sheets with the luxurious burgundy satin ones especially for evenings with a bull. He changed the sheets as she had ordered and she had him prepare a cheese and fruit tray for her and her bull to snack on.

He was also ordered to bring a bottle of their best Champaign and chocolates and set the tray on the night stand. Earlier that evening she had him draw her bath and bath her as well as shave her delicate areas.

She hated hair anywhere on the body except the head and she had her cuck maintain a smooth body at all times. Bathed her and washed her hair and helped her step out of the tub.

He dried her off with the plush bath towel and he applied body cream to her entire body. This was the only time he was ever allowed the pleasure of touching her nakedness.

She bent over the granite counter in the bathroom and he placed the wand upon her clit. She had an earth shattering orgasm within fifteen seconds of the wand vibrating against her clit.

Once she had recovered from her release he ran a wash cloth under the warm water and washed her delicate bud. He  helped her slip her feet into her mules and he slid the satin robe over her shoulders.

He walked with her to the bed and removed her mules and gave her a wonderful foot massage. She loved the massages as they relieved so much tension from her body and the foot rubs felt so wonderful.

He removed her robe and he pulled back the covers of her bed and watched as she slid her beautiful naked form under the covers. He told her he would be right back with her guest of the evening.

He brought the bull into her bedroom and she ordered her cuck to help the bull disrobe. He took each piece of clothing and hung it up so the clothing didnt litter her bedroom.

He pulled back the covers for the bull and once the bull was under them he covered the bull up.  His mistress ordered him to serve herself as well as the bull the cheese and fruit platter as well as the champaign.

He did as he had been instructed and then he removed himself from the room. He was so excited waiting for the evening to get into high gear but he knew she was very slow and sensual in her bedroom.

He left her room and found his rightful place in the chair behind the one way mirror. He could hear their conversation and watch her in action which was so hot he couldn’t help but pleasure himself.

He watched and listened as they  chatted and joked and then finally she took their glasses and sat them on the night stand.  She began to his her bull and run her hands over his body and finally finding his hard cock she began to stroke him.

She ordered her bull to get into the 69 position as she wanted to taste him as much as she wanted him to taste her.  She sucked on his hardness and fondled his balls as he licked and tugged on her clit.

It didn’t take long for both of them to have an explosive orgasm and they both licked every drop of orgasm liquid from each others bodies. He got so excited watching his mistress suck the bulls big cock he couldn’t help but stroke his own meager member.

He looked through the mirror and watched as the bull pulled his mistress up on all fours and buried his member into her. He grabbed her hips and fucked her deep as she ordered him to fuck her deeper and faster.

His mistress and her bull played all night long and as the sun rose she rang the bell next to the bed which was meant for him to come into the room. He was once again ordered to draw her a bath.

As her drew the bath she had ordered her bull to shower and dress and remove himself from her presence. Her cuckhold helped the bull dress after his shower and showed him out.

He bathed his mistress and changed the sheets to her favorite cotton egyptian ones. He helped her into bed and he knew she would be asleep shortly after he covered her up. He then exited back to his cage in the corner and both the cuck and his mistress fell into a blissful sleep.

My Mistress/Keyholder told me to strip Blindfolded me put me in a straight Jacket and had me kneel on the floor whilst she got dressed I had no idea what she would wear every now and again she would brush her foot or Hand or leg against my Locked Cock. Finally she told me she was going to use me as her Fuck Toy (oh yes I thought) and added that my pathetic Sorry excuse for a Cock would never satisfy her so she slipped a Strap on over my Cage whilst I was laid on the floor in the straight Jacket feet bound together with a Dildo gag she made me pump her as she sat over me I had to make her orgasm several times then she got off took the strap on off me and put it on her.